A fantastic transformation in Royal Arena

In only 13 days the LEN European Short Course Swimming Championships will take place in the new arena in Copenhagen, Royal Arena. 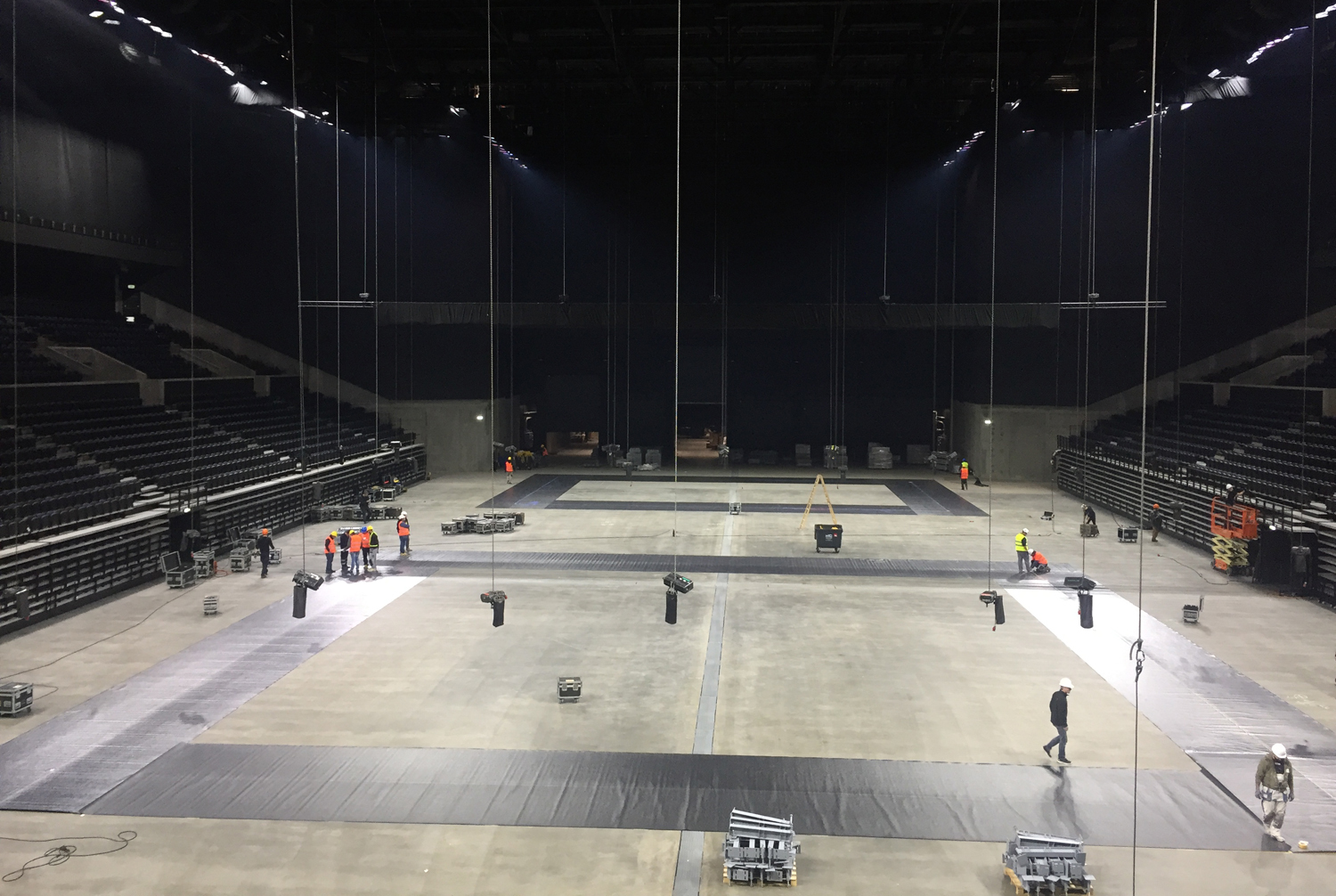 Only a few hours have passed since the never-aging German rock band The Scorpions left the stage at Royal Arena, and the transformation from state of the art concert arena to European Championship swim stadium has begun. In under 10 days the arena will see an incredible change where two new pools will emerge for the LEN European Short Course Swimming Championships from December 13-17 in Copenhagen, Denmark.

”We took over Royal Arena this morning at 6am, and our first job was to make the  markings of where the competition pool is to be built. Now the transformation from world class concert arena to world class swim stadium has begun, and in less than 10 days, the first swimmers will start training in the pools, so we will work around the clock to make ends meet. Around 30 people are building the two pools and around 20 people will build a new ground floor that is elevated more than 2 meters above the original floor,” Mads Bang Aaen, the Event Manager for the European Championships says about this huge project of transforming the new indoor arena from concert hall to the other purpose of the arena; an indoor sports arena of the highest international standards. Since Metallica with four incredible concerts blew life into Royal Arena in February, the arena has hosted numerous international top music names like Drake and The Weeknd. Now it hosts its first sport event with the LEN European Short Course Swimming Championships. 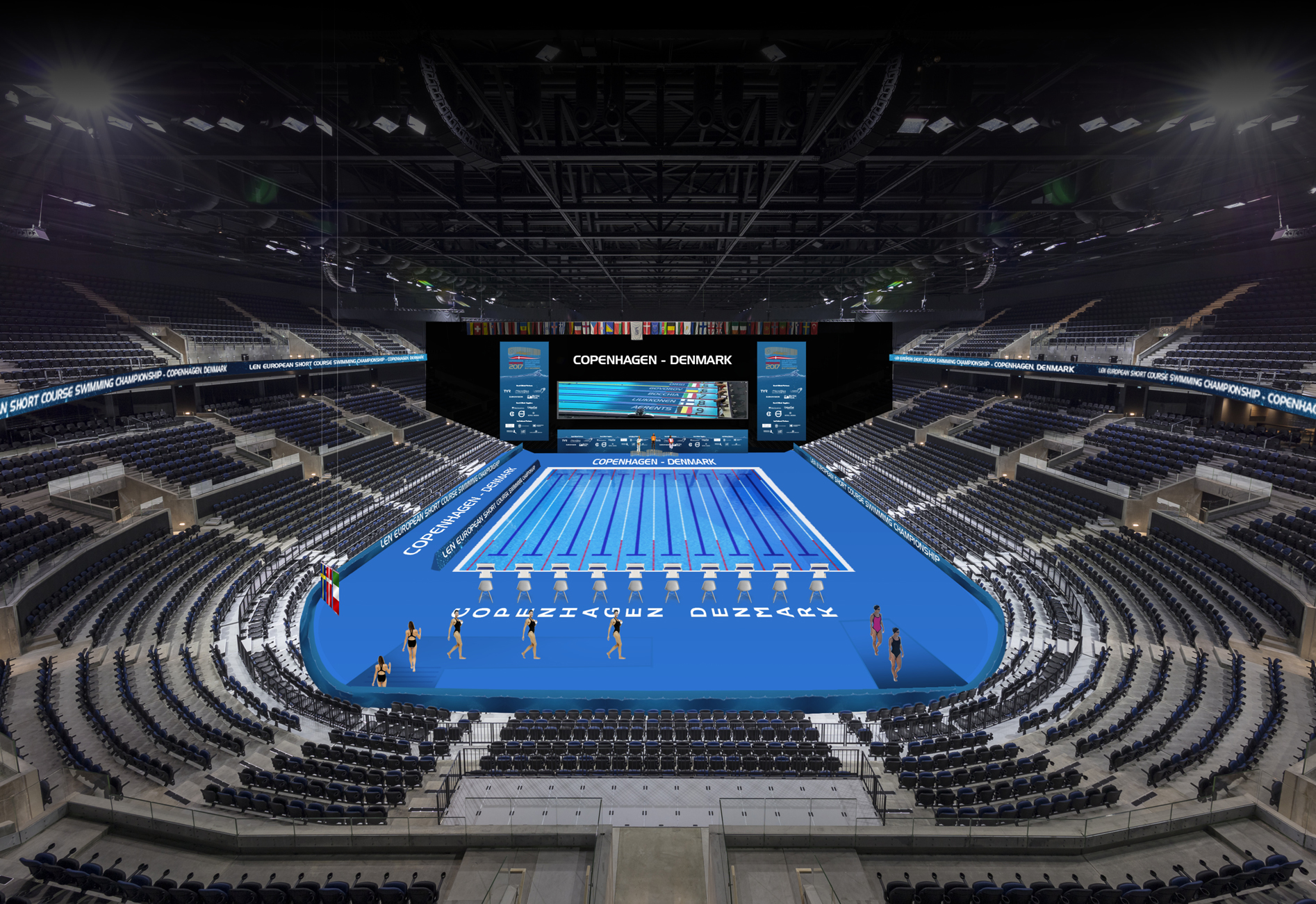 Two pools, 10 days of work and over 2 million litres of water

”The competition pool must be very precise. It has to be exactly 25 meters long and not a centimetre longer or shorter in order to be used for international competitions. When we have built the two pools, a new temporary floor will be built around the pools in a height of over 2 meters from the original floor. Once this is done we will start to fill the pools with water over the next many hours. Lastly a water test will determine if the water quality is high enough for swimming. Sunday December 10th the two, new pools will be ready for the first swimmers to jump in. This will be an intense and very interesting process but we can’t wait to present a beautiful, state-of-the-art swimming venue for all the spectators, swimmers and viewers around the world,” Mads Bang Aaen says.

Around 700 swimmers from 45 countries will compete for 40 different medal sets. Leading the Danish team is Olympic 50-meter free champion Pernille Blume, the Olympic bronze medal winners Rikke Møller Pedersen and Mie Ø. Nielsen along with Olympian and former European butterfly champion Viktor Bromer and two times Olympian Daniel Skaaning. These are just a few of the impressive Danish swim squad of 38 swimmers that will battle for glory to the delight of the home crowd.

”The LEN European Short Course Swimming Championships on Danish soil is the first sport event that takes place in the magnificent Royal Arena, and it will be 5 days of fantastic swimming where the Danes will be up against some of the best swimmers in the world, among them the likes of Olympic Champions Sarah Sjöström (Sweden), Adam Peaty (Great Britain) and Hungary’s Katinka Hosszú in the battle to become queens and kings of the pool. We are delighted to see that swim fans from 28 countries have already bought tickets, and over 20 percent of the tickets are actually bought from abroad. This is a high percentage in swimming, so I am sure we will have a great and intense atmosphere at the European Championships,” Mads Bang Aaen from the Organizing Committee says.

- Two temporary pools will be built in Royal Arena. A pool for competition and a warm up pool. A big carpet will divide the arena.

- The water temperature will be 26 degrees.

- The two pools will be built by the Italian company Myrtha Pools who also builds pools for The Olympic Games and World Championships.

- 700 swimmers from 45 countries will participate in Copenhagen

- The swimmers will compete in 40 different events

- So far spectators from 28 different countries have bought tickets for the championships, and over 20 percent of tickets sold are from countries outside Denmark.

- On the five competition days running from Wednesday December 13 to Sunday December 17 the preliminary races will take place in the morning session and semi-finals and finals in the evening session. View the program here: http://euroswim2017.com/UK/About/Program/

- 500 volunteers from Danish swim clubs will work at the championships

- The European Championships is the first sport event taking place in the multi arena, Royal Arena, that opened in February 2017 and also hosts major concerts.